I’ve been meaning to sit down and post for a while, but adult things got in the way and I couldn’t find the time. And before you go accusing me of watching movies and eating pizza, know that you are right. I have been spending more time just to myself because I think I’ve left part of me somewhere and instead of spending a lot of time going out of my way to find it, I’m just gonna grow a new part. Which sounds super gross if you’ve just watched a certain youtuber play through The Evil Within (Markiplier, it’s Markiplier). Any way, I’ve got a few new projects coming up in the next few months that I am very excited about. I’m not sure how much I can talk about one of them, but the other is pretty cool. We’re putting together a podcast. I think that’s all I’m going to say on that one, specifically because I know I’ll spoil something because I suck like that and I don’t want to do that.

You don’t realize how many people hate you until you update your blog at the library.

One thing that has been really bothering me is people who take creative writing courses because they assume it’ll be easy. That the class will be an easy A and there isn’t a lot of work that go into it. Now I’m not comparing a CRWR (creative writing) course to a 400 level engineering course. But I feel that there are quite a few people that are in my current writing course that are there because they thought it would be easy. That irks me so much. I mean, I don’t care what classes you take, you could take them all, but at least put forth an effort. Especially at university, where you’re paying to be here. If you’re not going to write anything, don’t take the course. I’m in a workshop class right now, and there are a ton of people who never say anything. I’m a little guilty of that, but that’s because there are some people in the class that choose to dominate and refuse to let other opinions stand without argument. Others just try to re-write the story without any actual feedback. Our instructor isn’t the greatest, but he’s not actually a professor. He’s our writer is residence at the college, so he has different ways of looking at the class and our work. I figured it wouldn’t be like the class we took last semester, mostly because of our instructor. But I was okay with that. He tries to lead the class to the best of his abilities, but I feel like there is a dominating force that deserves a punch in the face. Others aren’t going to share what they think as the ass sits smugly at the front of the room interrupting and arguing every point. If the shit he said was helpful then maybe, but it’s mostly just what he wants to hear himself say and I get angry every time he talks. He’s like the guy who joins your DnD session and then tries to be the DM because he’s read all the books and knows exactly how it’s played and obviously you don’t understand what you’re doing. Except I can’t kick him out of the group…

Speaking of DnD, there may be a person I can get a game started with here at school. There is a chance that I’ll get a job here during the summer, which means that I’ll have a place to live and everything, which is super nice. There are a couple of people who seem interested and it would be nice to get into gaming again. It’s a lot of fun and it’s a great way for me to release stress.

I’m working on a new short story. This is a lot different than the last one, there aren’t any creepy monsters or white cats. It’s a story about a guy named Draper that gets a job at an amusement park that is run by an omnipotent god that has no idea what he is really doing. Draper is a sad guy with a pretty complex back story that doesn’t get explored all that well yet. I had the SO read it and he said it works, but he inspired the story so he already understands the backstory. I’ve got to find a way to fit that into it without being blatant. There is a writing competition that takes place on campus that I’m thinking about going for. An former professor sent our old class an email about it with the tag line “What have you got to lose?”. I miss her so much, I wish she taught 340. There honestly needs to be more people like her teaching at the university level.

I like how I can’t seem to write when I need to but then I’ll hammer out a post with over 800 words in a matter of minutes. That has never made sense to me.

Anyway, keep an eye out on twitter/facebook for announcements of my upcoming projects, because I”ll probably share there first and I’m always open to feedback.

EXCITING DAY TODAY! I went to my storage unit and I retrieved my yarn stash! I didn’t think I would have had room for it, but Bryant insisted that we just take the whole thing home with us. So I have ALL (I think) of my yarn now. With the reacquiring of yarn though, always leads one to believe that they need a new storage container for it all. And that is something I definitely plan on acquiring.

I just have to re-wind all of my yarn into pull-center balls. The are much easier to use, don’t roll around as you use them, and just over all look cooler. I use them for both crochet and knitting; I know a lot of knitters who use them. Most people I know who crochet don’t use center-pull balls. Perhaps they just choose not to, or don’t know it’s something that exists.  I like them though, they look like this if you were wondering:

I still haven’t started a new project. But I’m hoping that my spinning stuff is in my yarn stash box somewhere. That would be a nice project. I was looking at pictures of the first yarn I ever made the other day and I sighed. It is so awful!

That was quite a while though.

So tonight, I bid “good day” to another talon, this time the thumb from my right hand. It was a painful removal, I caught it on a sliding glass door as I tried to open it while it was locked. Now before you judge me while I tried to open a locked door, please know that I was trying to open the door without looking at it to let a dog out and I was opening it on the opposite side of the handle. It’s something I do a lot, because I’m lazy.

You were a good talon, you are a missed talon, and you are survived by Left Thumb Talon. No longer with you pull knots from yarn or small pull beard hairs that have penetrated Bryant’s thumb. You will always be remembered for your loyal service.

Oh and I made myself a double nail for a little while. 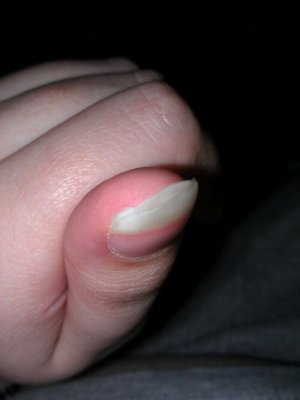