Winter Break is here! Woo! Finals are over, grades (that I haven’t looked at) are in, and everyone is leaving campus. The roads are terrible and the weather is negative. The SO and I decided that we weren’t going to try to beat traffic and deal with everyone trying to drive over the Continental Divide at once so we waited a few days for the traffic to die down. We stayed at his place in FGH, as they closed my dorm on Saturday, and I had no where to stay. We didn’t want to kill each other after the weekend was up and that was really great to learn. It was nice to just relax and enjoy each other’s company for a while, and on Sunday night we went out to a local restaurant called Dave’s Sushi.

We had been here one time before, but it had been a very long time since then. We went back in early 2015 we we first were together. Dave’s Sushi is a very hip eatery. It can only sit 81 people, so it gets crowded fast. In the summer they do have patio dining, but we haven’t had a chance to experience that yet. Just FYI, they don’t accept reservations for groups smaller than 7. You may have a bit of a wait depending on the night that you go. They are open 7 days a week and usually go until about 930-10 on most days. They are a little more on the spendier side, but with this being Montana the prices aren’t that bad for our land-locked, no local fish market scene.

They have a pretty lengthy drinks menu, but no hard alcohol. They have beer, wine, and sake. We’ve had a few of their sakes before and our favorite is the House Sake. Our waitress was incredibly fast with taking our order.

We started the evening with an order of edemame (blanched soy beans) sprinkled with kosher salt. You can’t really screw up edemame, but the shells were soft and warm; the beans were firm, but cooked. 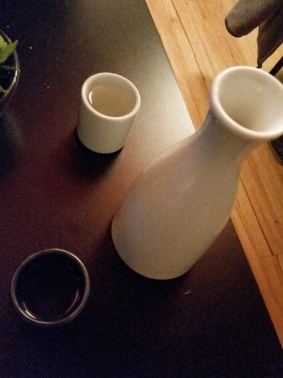 We ordered a large bottle of sake, and I got the black cup. Their House Sake is served warm and it was the perfect temperature. I’m always nervous ordering a warm sake because there is such a thing as overheating it and it ruins it. But ours was perfect. The finish is soft and there isn’t that regretful burning sensation in your throat like there is with certain sake. It also isn’t mixed with a fruit which is definitely a plus. I haven’t liked any of the fruity sake that I’ve tried.

Make time at Dave’s Sushi isn’t that bad. In some sushi places they take forever to get your food out to you, but Dave’s is very fast. I think between placing our food order and getting it was only about 15 to 20 minutes in a fully packed restaurant. 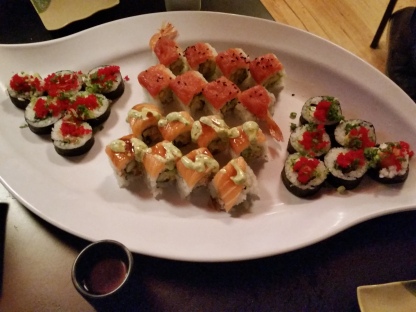 They had a great special the night that we went. It didn’t have a name it just listed the ingredients.

I can’t remember what was in it, because I [s]forgot a notebook to write everything down with[/s] forgot to write things down because I was to busy eating. What is topping it though is something I hadn’t had before. From what Patrick and I could decipher, was tobiko soaked in a habenero-mango juice concoction. It was spicy and delicious and I could have eaten just that with a spoon. 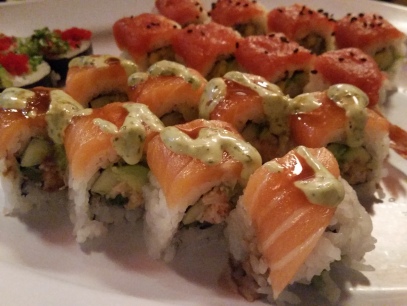 We also had the “Le Possion” (the one topped with salmon) and the “Grave Danger” (the one topped with spicy tuna and black sesame seeds). I picked out the Le Possion and Patrick picked the Grave Danger. Ingredients were super fresh. The cilantro mayo on top of the salmon was different, and was recurring throughout the menu. It was nice on the Le Possion but it accompanied two of our rolls in round two, which I will get to in a moment. The Grave Danger had a bite to it, and I very much thought it was going to be too much for me to handle. I love spicy but can’t take much heat (because I’m a wuss). But once again I was pleasantly surprised. Everything combines so well in your mouth that it didn’t even dawn on me that it was hot until the burning started to build in my mouth. Much water was consumed this evening. 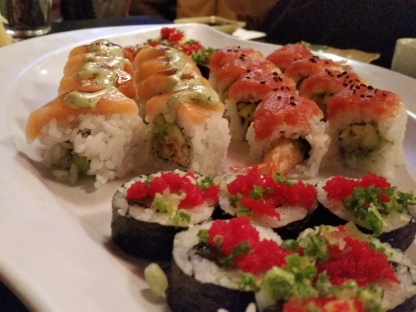 I would recommend all three of these roles to someone. They are delicious and complex.

The second round confused me a bit when we got it. I thought two of the rolls were the same. I was wrong when I bit into them, but they totally look alike.

This round we got what we loving dubbed “The 80’s Platter”. (From left to right) The David Hasslehoff, S’Happening, and Thai-na-mite. The David Hasslehoff is the other roll that came with the cilantro mayo. It was also topped with a bit of fresh lime juice and for me that didn’t work. It was still good, but the flavor fell a little flat for me. The Thai-na-mite was topped with green curry sauce, which was really good. This one had cilantro on the inside, which made me feel a little cilantro’d out. It was in everything. The S’Happening was my favorite of the three. It had the least amount of ingredients but was still very flavorful. 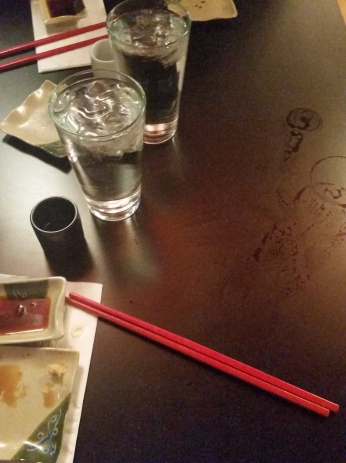 In conclusion, we left full of good sushi, good memories, and good sake. I highly recommend Dave’s Sushi to anyone needing their raw fix after skiing up at Big Sky. They do have other things on the menu, but what’s the point of going to a sushi restaurant if you’re nothing going to order sushi. 9/10