So, I have a bear. His name is Rodney. Those two sentences eerily remind me of something that I had to write in the first grade about my favorite thing. Without the ‘so’ part. But, back to Rodney. 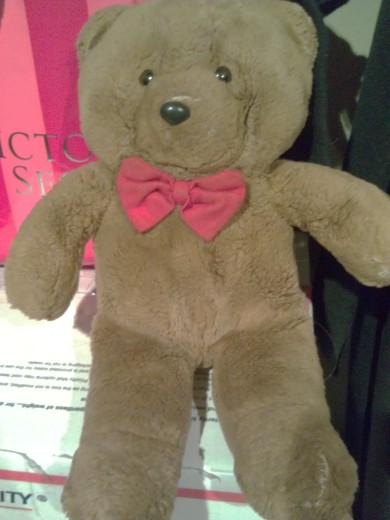 That is Rodney. He is about 22 years old (give or take a few months). I have NEVER gone anywhere without him. Every move I have ever made, every trip I have ever taken, every new house I have lived in, I have had Rodney.

I recently had to pull him out of storage, as I don’t want to have him in Bryant’s parents house because I don’t want their dogs to eat him. Because I would be so incredibly heart-broken that I would probably cease to have a happy day. I’m not even being hyperbolic for the most part. Rodney has been a crucial part of my life.

Bryant think it’s funny. He says that he has seen it more in girls. That we usually have a blanket or a teddy bear. But, Rodney is more than a Teddy Bear. He is a part of me. He is a constant that I have come to rely on for emotional support. We’ve gone across borders together. He’s the best little bear that a girl could need.

This isn’t really a humorous tirade like I usually go off on, but a sentimental one. This time next week I will be on a train headed for new things.

I’m planning a few daily posts for the future. I’m hoping to have ‘Reading Room Mondays’ where I talk about a book I read over the weekend/week. Things like that.

1 thought on “Rodney The Bear”