So, We had a date night the other night. I got to go out with this handsome devil:

We rarely have full fledged date nights anymore because we are both so busy with class and our regular lives that we usually just have dinner in the dining hall together and that’s that. But the semester is just getting more stressful for the two of us, and with only one of us going home for break we won’t see each other for a while. I start my new job on the 28th which will limit our time together even more, so we picked Saturday and went for it. He wanted pizza, but I was able to convince him to try the little Korean place that we pass all the time and we’ve never been in. It’s a tiny little place off the main road that shares a building with a hair salon and another store called “Earth’s Treasures” (which I assume is a geology shop) and it’s across the street from an auto parts store, somewhere you wouldn’t really notice. I first noticed it when we were out drinking one night about a year ago and kept wanting to go, but wasn’t sure when to go. I’m also a terrible blogger and forgot to take pictures of everything, so I pulled a TON of photos from their facebook page. So here we are.

The facade of the restaurant, like I said, is pretty nondescript.

And as soon as you walk in you are greeted by an modern interior. With corrugated tin along the register, mismatched lighting and chairs, exposed brick, and bright green accent paint, it was very inviting.  It wasn’t a place I would call a ‘hipster’ location, even with the aforementioned decor. It was comfortable. Though they do play K-Pop over their sound system (if this is a surprise to you, it shouldn’t be. It’s a Korean restaurant) it isn’t ear blasting terrible, at least for me. 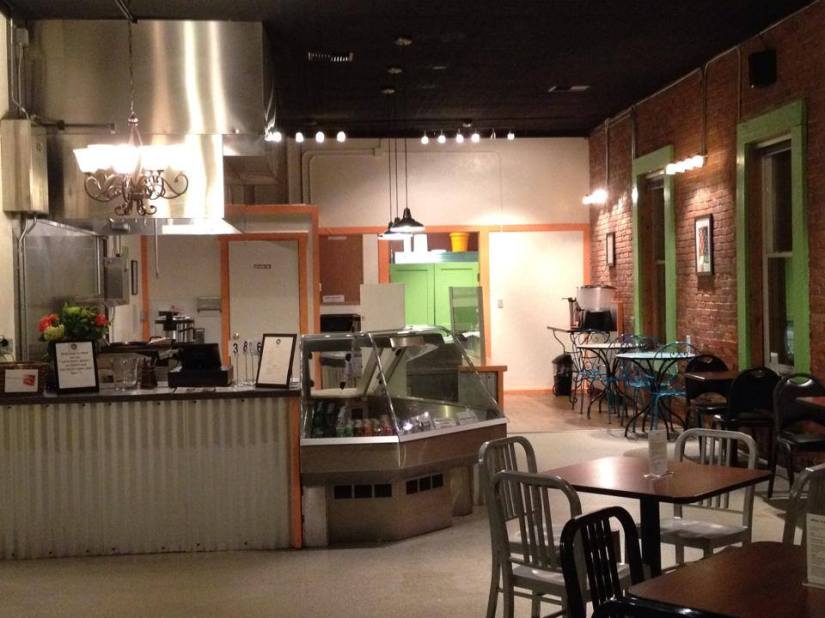 The employee at the register was quick to note we had never been there before and took charge right away to help let us know where the menus were, told us about dishes that weren’t really familiar to most people (thankfully I watch enough Simon and Martina to have an idea of what I was ordering), and was totally there if we had any other questions. As the SO and I are larger than the average person, routinely needing more leg room and tables are usually on the small side when it comes to a place to put our arms, I appreciated that the tables were very spread out. It wasn’t that busy for a Saturday night, but we were there at about 5pm and Bozeman night life doesn’t really take off until a bit later in the evening (looking at their facebook page, they regularly sell out of food on the weekends, so I’m going to consider us lucky).

We ordered at the register (I ordered the Bulgogi Bibimbap and the SO had the Spicy Bibimbap (no meat), we also ordered a starter of Bibim-Mandu with chicken) and took a seat at a table that was near the door. As soon as we sat down another employee brought over a complimentary side of pickled cucumbers and our silverware. I wasn’t expecting that, and as the SO distracted me with pointing out that the chopsticks were metal and I explained to him that a lot of Korean chopsticks were metal because it saves on bamboo, he beat me to trying them first (which means that I didn’t get a picture of it because that meant it was a fight to eat more than the other, but I found this one on google).

They were so good. Crunchy and firm, but still tart and vinegary. The spice on was just right for me. Not kimichi spicy (thankfully), but it was a great introduction to the meal we were going to get. Our starter came out pretty quickly, which sometimes makes me nervous, but everything was fresh. Bibim-Mandu is different than regular mandu. Bibim-Mandu aren’t stuffed, you use the dumpling shell like a taco shell and you stack the fillings on, dip the whole thing in spicy red sauce, and tuck it away in your mouth. Delicious. The spice and seasoning on the chicken was really good and was complimented by the spicy red sauce.

Also, metal chopsticks are heavier than I thought they would be. I found myself holding them a lot further back than I would and it changed the way I ate. So, chalk that up to a fun new learning opportunity.

Our food came out at a pretty decent time after we were done with the starter, and we had some leftover bits from the Bibim-Mandu and we tucked the extras into our Bibimbap (which we had served in regular bowls, next time we are going to get sizzling bowls) and topped it with red sauce and mixed it all together (which is what you do) and dug in. 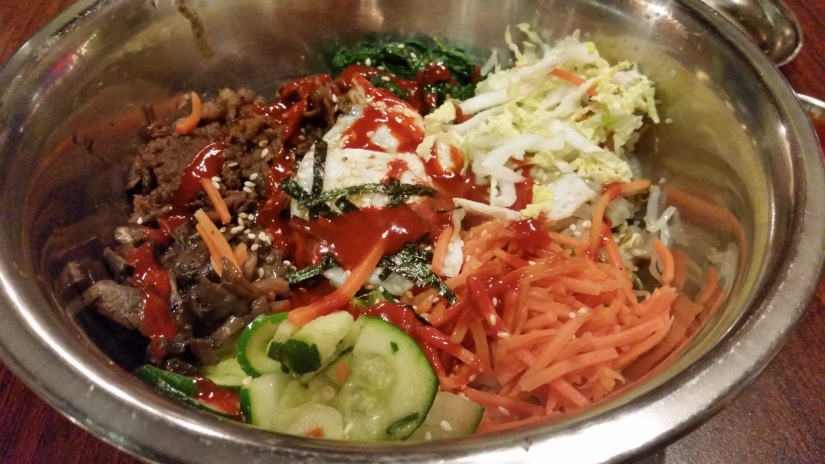 The SO was so excited that he dug in before I could get a photo of his, but this was before I mixed all mine together(his looked like mine, but without the beef). There is a nice fried egg in there, Korean beef, and veggies all on a bed of fresh rice. I don’t know what that red sauce is, but it is so good. I didn’t put to much on the first mix up, because I do like spicy but I can’t handle a lot of it. I did get to try him, and I thought it was a little weak for it being the “spicy” option. So I added the rest of my sauce to it and ate it up. And then it happened. The burn starts at the back of your throat, sneaks up into your sinuses and then sounds the alarm. It was such a sweet burn and made everything taste awesome.

My favorite thing in the whole bowl was that chunk dedicated to the beef. It was absolutely the most amazing beef I have ever tasted. It made me close my eyes to savor it and it just sent happy signals through me entire body. It was moist and salty, but not to salty and it just hit all the right spots on my tongue.

I won’t like, it did not take long for us to finish eating, we barely spoke to each other because it was just amazing. I haven’t stopped thinking about eating there since then. I would have gone back for seconds but instead we went to get bubble tea. 10/10, would go again. I love Whistle Pig Korean!

From what I understand, there is only one bubble tea place in Bozeman, and I wish there were more. I love Townsend Teahouse, but it isn’t really within winter walking distance. Townsend and I have a bit of a history, they were the ones to sell me my first ever bubble tea to me when I lived in Portland. It was a green tea peach with fruit jellies. I remember because it was amazing and now that it was in my life I didn’t know if I could live without it (I totally did, but it wasn’t as fun). So when I found out that Bozeman had a Townsend it scored points when I was looking for a new uni.

I usually get green tea, aloe jellies, and then a fruit combo. I’m not a fan of tapioca pearls, they just don’t taste good to me. Patrick got them this time. He is a fan of mate tea and fruit jellies. I went for a peach and raspberry combo as it is made with real raspberries. They were out of fruit jellies, so Patrick tried something new without heeding my advice and decided in the end I was right.

Overall, it was a great night that we got to spend together and we got to eat some amazing foods. I’ll be back Whistling Pig. I know your MSU Student Special now, we’re gonna be best friends. 🙂