I’m actually a fan of McCloud and I’m glad to be reading something that I can identify with. I used to co-author a short comic with a friend of mine, back in the day when a notebook and a pen were the only tools we had and our friends had to hand the notebook around to read. So I have some appreciate with what McCloud does in Understanding Comics. Comics are hard, you want characters to be distinct but at the same time (at least on the part of the artist) you want them to be easier to draw. Overly detailed characters take up a lot of time that can be better spent doing other things, so McCloud’s section in chapter two is there to remind you that the character just needs to be recognizable. I like to think that the more simple a character is the more you, as a reader, are able to fill up those ’empty’ spaces and put yourself into those spaces. For me it helps characters that, otherwise, we wouldn’t be able to identify with. It’s a technique that McCloud calls masking (with some combination of background involvement, but I’m not talking about that).

Now I was never the artist in our duo and at the time probably couldn’t be bothered with blank space in the frame. That was okay though, she understood it. Not everything needed to be filled in, not every prop in the scene needed to be detailed out; we just knew what it was. We knew that what ever we put on the page is what was there. If there were lockers in the frame or a large caravan (we did a real life and everyday comic as well as a comic called The Red Circus) we just assumed that there was something in there, but we didn’t need to show it. At least I did, I guess I shouldn’t speak for her. The readers also understood that they didn’t need to see the inside of the caravan in order to know that it was probably bloody inside (The Red Circus was not an all ages comic, it was (for us at the time) quite gory).

One thing I want to point out, is how McCloud is avoiding actually using the Mickey Mouse logo but mentions it through out. Especially on page 64, I didn’t realize what he was showing us right away until I read “Sometimes, a mere shape or outline…” I understand this to mean that he didn’t have the rights to the images but still, his point was made before I even realized it. I feel similar to this as I do when he references how we see ourselves in everything, like cars and soda can tops.

I do wish I had this book when I had gone about my early comic career. Maybe we would have stuck with it. Now I just make memes like the rest of the internet. 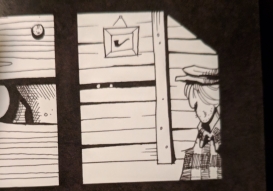 One last thing I want to add, is that I recently read Grim Grisley’s Frankenstein and McCloud’s concept of “The pipe is not a pipe but a drawing of a pipe…(and so forth)” is on the wall of the cabin where the Creature learns to speak and read. It was pointed out in the class we read it for and I thought that was a nice tie in with what we’re discussing in this class now.